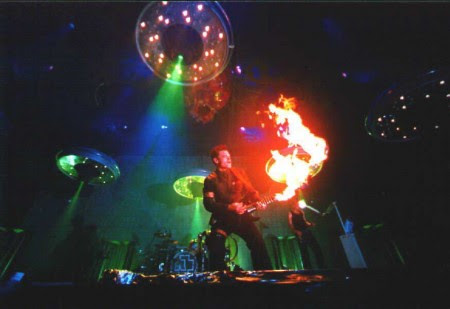 Daniel Kalder praises some German originals who seem to have sprung fully-formed from the head of Wotan.

Was ist das? I thought. The credits revealed that it was an outfit called “Rammstein”, but that meant nothing. A few weeks later however I was back in Moscow where I lived at the time, shopping for sounds in the open-air pirate market Gorbushka and lo! I stumbled upon a weird cassette, featuring six oiled, naked from the waist-up Germans posing in front of a giant flower. This, apparently, was Rammstein, and track eight- Heirate Mich- was the song from the movie.

At the time I was more of a 70s art rock/Algerian Rai man than a fan of Teutonic heavy metal. But beneath the grinding riffs, the guttural vocals, the industrial synths I detected something unexpected: a gift for melody, a sense of rhythm, almost, at times, a groove. It was, in other words, sehr gut:

Mere weeks later Rammstein released their second album, Sehnsucht which featured more grinding riffs, a female vocal and a bit more synth. It also contains what is probably the band’s signature track, Du Hast which became briefly notorious in the US since the Columbine killers dug it big time. Note the martial beat, and the obvious pleasure lead singer Till Lindemann takes in enunciating the sounds of his native language. Like Kraftwerk before them, Rammstein embraced their Germanic identity, albeit very different aspects of it:

The clip above is from the concert film Live Aus Berlin, when their stage show was big but not yet the epic piece of infernal rock theatre it would become. It also dates from a period when Rammstein’s sense of the absurd was less on display. Two tours later, and some members of the band had abandoned the “scary cyborg” look for lederhosen and even (in guitarist Paul Landers’ case) a monk’s tonsure. However Lindemann’s unique body language has always remained constant- a champion swimmer in his youth, he is a huge presence on stage, alternately doing the “Rammstein squat”, pounding his fist on his knee, or staggering around looking alienated from his own ageing carcass, a profound melancholy in eyes.

I was lucky to discover Rammstein in Russia, because they were massive over there. Each release was an event, rather than an esoteric fringe thing as in the UK or US. The Mayor of Moscow was outraged by their sturm und drang stage antics, thought they were fascists and banned one concert I had tickets for lest Moscow’s many skinheads were inspired to go on the rampage. A year or so later he relented, which was good because it meant that after I had cleared multiple police barriers I could enjoy a live performance of Mein Teil, a song inspired by the penis-munching German cannibal Armen Meiwes:

Both Du Hast and Mein Teil are present on the recently released overview of their 16 year career, Made in Germany: 1995-2011. Putting together an effective compilation is an art, and Rammstein kept the track list secret until the last moment, making fans such as myself nervous. How could you select a single disc worth of songs from five excellent studio records (the band have in fact released six, butRosenrot was rubbish). Would the sequencing work? I feared a travesty like Pulp’sHits- an incredibly lazy serving of obvious songs from their four Island albums, presented in chronological order, and thus tapering off in quality drastically towards the end. Dreadful.

Fortunately, the sequencing of Made in Germany is excellent. The thing about Rammstein is that they sprang fully-formed from the head of Wotan. Membership of the band has remained constant, and they have always worked with the same producer. Rather than mess about with different styles, they have instead refined and developed the sound they were born with. Thus although the first six tracks were recorded over a period of almost ten years, the riffage is consistently mighty, whether exceedingly brutal in the case of Links 234 a military march proclaiming the band’s allegedly leftist leanings (they were tired of being called Nazis), or exceedingly brutal, as in the case of Keine Lust in which Lindemann laments his lack of desire to do ordinary things such as masturbate or chew food, whereas those things he would like to do- say, have sex with large animals, involve rather too much risk. This fine song was accompanied by a rather entertaining video (available on the luxury box set edition) in which the band perform in fat suits:


It’s not all brutality and perversion however. Rammstein may operate within strict sonic parameters, but this does not stop them from experimenting with their sound. Thus track 8, Mein Herz Brennt, begins with a rising swell of strings, as Lindemann sings the opening narration from an East German kid’s show The Sandman rendering it into something anguished and nightmarish:

(NB: the last two videos are in fact the same song.)
One of Rammstein’s great strengths vis a vis American heavy metal is that they are not inspired by rage, with its drastically diminishing returns (see the career of Metallica for an example). Rather they do melancholy, strange lust, yearning, grief. Lindemann was already 34 and a divorced father of two when he became successful. Knowing the hardships of adulthood, and the deprivation of an East German upbringing, he is not inspired by adolescent themes. Rather, he is inspired by the thought of Snow White enslaving the seven dwarves and doing coke, before dying of an overdose in the bath:

My only substantial complaint about Made in Germany is the quantity of tracks (five) selected from their third album, Mutter. Sure it is a work of art, possibly their finest recording, and it was their major international breakthrough. But they could definitely have cut the title track in favour of, say, Heirate Mich, which I linked to above. Meanwhile their sixth album, Liebe ist fur alle da is represented by an odd song selection, which might dissuade a neophyte from investing in a copy when I’d rank it as one of their best. Tokenism then lumps us with a track from Rosenrot which could easily have been omitted in favour of something better. But that’s what the skip function on a CD/MP3 player is for- so you can hop over minor mistakes to enjoy tracks such as this:

Some of the missing classics appear on the CD’s second disc, albeit in remix form. I’m not sure whether this second compilation will make much sense to those unfamiliar with the originals, but it’s a lot of fun nevertheless. I suspect Faith No More thought they were taking the mickey when they reduced Du Riechst So Gut to romantic strings and voice. Little did they realize that Rammstein were in on the joke already, and would go much farther in their pursuit of radical or frankly bizarre reworkings of their songs. In many cases the heavy metal guitars disappear completely, and the focus is on electronics and voice, such as in the trancey remix ofStripped by Tiamat, a Swedish black metal band. The somewhat tiresome satireAmerika is rendered into a boppin’ bossanova, while Rammlied becomes a polka, complete with banjos and yodelling. And if you have ever wondered what the Pet Shop Boys sound like with a guttural German bass baritone as their lead singer, why not try out their disco version of Mein Teil? The best remix however is probably Laibach’s version of Ohne Dich. The mega-bombastic Slovenes were a major influence on Rammstein’s sound, imagery and provocative tactics- something, it seems, the band was for a long time wary of fully acknowledging. But Rammstein never really got into Laibach’s ultra-arch, cerebral irony, which left their elder Slavic cousins the creative space to make this preposterous/awesome version of Lindemann’s mournful, melancholic ballad: