One-Armed Gunslingers and Germans in Teepees: A Brief Guide to the Euro-Western (The Millions)

The Western is the quintessentially American genre. However played out it might seem at times, it offers an incredibly versatile context for near-mythic narratives about good and evil, tales of man against nature, man against man, man establishing civilization in the wild, and the sins man commits when establishing that civilization. From Zane Grey to Cormac McCarthy, even the pulpiest narratives articulate some aspect of America’s sense of self. Perhaps it’s surprising then that Europe also has strong traditions of the Western, including mega-bestsellers that are practically unknown on this side of the Atlantic. But what happens when you feed profoundly American tropes into the psyche of a German or a Frenchman? Do you get something wild and interesting, or derivative dullness? Does the reader receive startling new insights — or merely a glimpse of a distorted looking-glass America?

The most successful writer of Euro-Westerns is the German author Karl May (1842-1912). May is one of those quintessentially 19th-century figures who led an astounding, picaresque life that a modern day publicist could only dream of (or perhaps invent). Born in a small town called Ernstthal, May went blind in his childhood and developed a wild imagination in the darkness. Then he regained his sight and went on to an adult career as a teacher, thief, con-man and occasional jailbird. He struggled for years to make a living as an author before striking the mother lode between 1893 and 1899 when a series of adventure stories set in the exotic East and American West made him a fortune. May then fell into disgrace as he claimed to have experienced everything he wrote about, even posing for photos dressed as “Old Shatterhand,” the white blood-brother of his American Indian hero Winnetou. After his death, May continued to attract controversy — Hitler was a big fan, and forced the tales of Winnetou on his generals (for “tactical advice,” apparently). Klaus Mann held May partly responsible for Hitler’s genocidal anti-Semitism, writing in his 1940 essay “Cowboy Mentor of the Fuhrer,” “Old Shatterhand continually quoted the Bible claiming that he was invested with a divine right to exterminate inferior races, and we know that Hitler frequently expressed this view in later years.”

Q.E.D.; but here Mann is being unfair. One striking difference between May’s books and those of his American contemporaries is that he reversed the classical cowboys and Indians dynamic, making Native Americans the heroes of his tales. Of course, James Fenimore Cooper had written sympathetically about America’s indigenes in Last of the Mohicans (1826), but it would be a long time before that became a mainstream feature in popular Westerns. In Europe however May’s innovation (combined with colorful plots and meticulously researched detail) struck a chord: the official site of the Karl May Museum informs us that 100 million copies of his books have been sold in Germany, with another 100 million selling outside the country in 33 different languages. Hitler taint notwithstanding, May’s books remained popular in Germany after 1945 as a series of commercially successful movies starring a French aristocrat as Winnetou were shot in Yugoslavia in the post-war years.

It’s tempting to speculate that whereas American readers enjoyed Westerns for their idealized portrayals of decent white men civilizing the wilderness, May’s success was based on tapping into European ennui with that very civilization. He channeled both Rousseau’s fantasy of the “Noble Savage” and the Romantic nostalgia that had sent philologists up mountains and into forests in search of folk narratives before industrialization swept them away forever. Perhaps to German readers, American Indians such as Winnetou represented everything they feared was already lost in the Old World — a connection with nature and authentic folk wisdom. The American literary world wouldn’t reach this point of nostalgic yearning for an idealized past until a generation after Wounded Knee, when John G. Neihardt produced Black Elk Speaks (which was rapidly translated into German at the urging of Carl Jung).
In some ways May is more successful than any American Western writer has ever been. He only visited the U.S. at the end of his life, and even then didn’t venture further inland than Buffalo, N.Y. He preferred the West of his imagination; so do many of his readers. May was a world builder, like J.R.R. Tolkien. A few years ago, I was startled in Berlin’s ethnographic museum by photographs of Germans wearing headdresses and living in teepees. I forgot about this strange subculture for years until I read a story about the large Karl May festivals that are held in Germany complete with re-enactments of scenes from his novels. One group of Native American servicemen had attempted to make contact with these “German Indians” only to be rebuffed as “inauthentic” — according to the Europeans they had lost touch with their own traditions!
But Karl May is not the only important creator of Westerns in Europe. Perhaps the finest cowboy movies ever made were shot in Italy, based on plots lifted from Samurai movies. Their distance from the physical Western landscape liberated Italian directors like Sergio Leone to bend and distort convention, to create purely imaginary fictive worlds, whereas American directors perhaps felt more of an obligation to pay at least lip service to what was on their doorstep. But in terms of books, it is possibly in Francophone countries that the Western tradition is strongest, and not only in novels but also in bandes dessinees, AKA cartoon strips.
Cigarette perpetually dangling from his bottom lip, Lucky Luke is a cowboy who can outdraw his own shadow and lasso the wind. Although the strip was originally Belgian, Luke’s most popular adventures were written by the Frenchman René Goscinny, best known in English-speaking countries for co-creating Asterix with artist Albert Uderzo. Immensely popular to this day, attempts to export Luke to the U.S. have failed, the most recent being a series ofcartoons Hanna-Barbera adapted for the Saturday morning audience in the mid-1980s.
Of course the French have been fascinated by America at least since the Revolutionary War which inspired their own less successful variation on the theme in 1789. Thus parallel to the parodic adventures of Lucky Luke we find another immensely popular series, Jean-Michel Charlier and Jean Giraud’s Lt. Blueberry. Artist Giraud achieved fame in the U.S. for the psychedelic SF stories he published under the pseudonym Moebius in Heavy Metal in the 1970s, subsequently working as a designer on such films as Alien and Tron. In the 1980s, Marvel Comics published several fat volumes of his Blueberry stories in translation, startling fans of his fantasy work with the sheer classicism of his Western style and the relative conventionality of the adventure narratives. Giraud had spent time in Mexico in his youth, and was adept at illustrating a Southwestern landscape; thus in Blueberry he cleaved tightly to representational realism. A subsequent film starring Vincent Cassel as Blueberry that attempted to fuse Giraud’s Western hero with Moebius’ surreal style was a disaster.

Most, if not all attempts at bringing non-Spaghetti Euro-Westerns to a U.S. audience have failed. Blueberry is long out of print, and although there is a small press called NEMSI dedicated to publishing Karl May’s work in English — it is very much a niche affair. Recently however the Los Angeles-based wing of French publisher Humanoids attempted to bring another example of the genre to American shores. Like Lucky Luke orBlueberry, Bouncer: The One-Armed Gunslinger is a comic strip, but one written by the legendary underground film director Alejandro Jodorowsky.

Jodorowsky has a life story almost as exotic as Karl May’s. Born in Chile in 1928 as the grandson of Russian-Jewish immigrants, he traveled to France in the 1950s where he studied mime with Marcel Marceau and wrote some of his mentor’s most famous scenarios. Subsequently he joined forces with the Spanish playwright Fernando Arrabal and French writer-artist Roland Topor to found the Panic Movement dedicated to the usual business of shocking the bourgeoisie, etc. Meanwhile Jodorowsky had already begun to fuse surrealism and spirituality with pop culture in comic strips he wrote and drew himself and which were published in Mexico in the ‘60s. This fusion of “trash,” the bizarre and metaphysical themes has been a hallmark of his work ever since. His breakthrough movie El Topo (1970) was a hallucinatory, ultra-violent quest narrative dense with symbols but also conforming to many conventions of the Western. In his impenetrable memoir The Spiritual Journey of Alejandro Jodorowsky, he begins each dense meditation on Zen with an epigraph from the Westerns of “Silver Kane,” who between 1951 and 1975 hacked out 1,000 pulp novels for the Spanish market.
Since his planned movie adaptation of Dune was aborted in the late 1970s, most of Jodorowsky’s formidable creative energy has been poured into cartoon strips, where his preoccupations with sex, violence, spirituality, and physical deformity rampage as gleefully on the page as they once did on the screen — which is why anybody looking for a typical Jodorowsky head trip may find Bouncer: The One Armed Gunslinger startling for its restraint. The relatively realistic tone is set by artist François Boucq, whose depictions of the Western landscape are stunning. The setup is classical –- in the town of Barrio City somebody is assassinating figures of authority via the bite of a poisonous snake. There is an evil land baron, a corrupt sheriff, and there are whores, saloons, and squabbles over territory, etc. 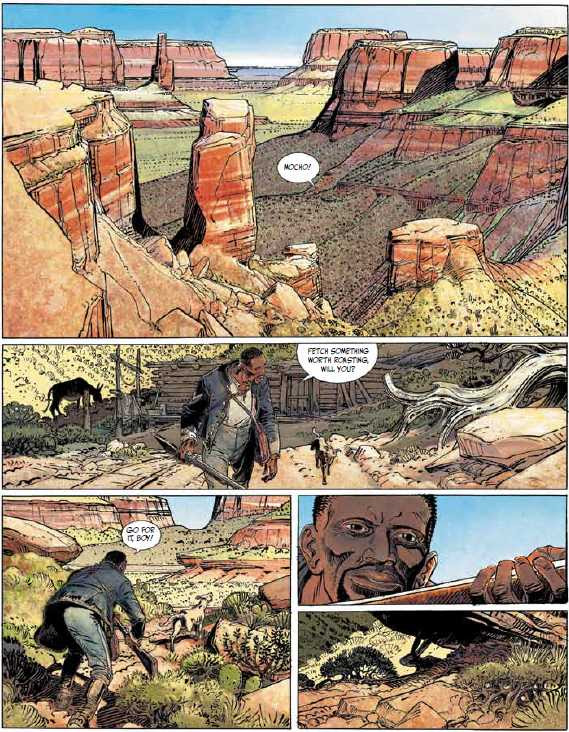 The strangest thing in Bouncer is the titular protagonist — a dense, bizarre distillation of Western anti-hero tropes. Drunken, illiterate, the one-armed son of a whore, he is nevertheless nearly as quick and accurate on the draw as Lucky Luke. Bouncer moves in a world of exaggerated violence and evil much darker than that of conventional Westerns. Jodorowsky subjects his hero to constant degradation, humiliation, and cruelty — as the town’s hangman he is forced to execute the love of his life and her husband. Later, bodies are fed to pigs in a scene that recalls the almost equally cynical HBO series Deadwood. But Bouncer is much more tightly plotted than that brilliant/turgid TV show. There is a spectacular scene featuring three Mexican assassins and a devilish monkey. The masterful silent choreography is a vivid reminder that Jodorowsky is the only trained mime ever to write a Western. 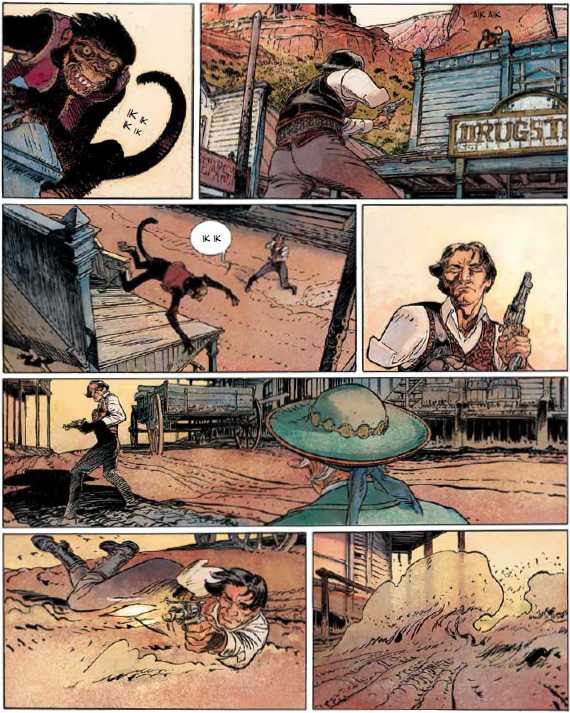 Towards the end, Jodorowsky’s characteristic spiritual concerns emerge in full force, and the book departs radically from the tone of most, if not all, American Westerns. Jodorowsky is promiscuous with symbols; he never tells straight allegories, but rather spins genre stories saturated with imagery that can be interpreted in different ways. Thus as the assassinations of Barrio City’s notables mount, Jodorowsky seems to be mounting an almost Sadean assault on earthly authority. His heroes are all deformed or mutilated physically and spiritually, but striving towards a goal higher than the accumulation of power and wealth. Finally the assassin reveals himself to Bouncer and the solution to the mystery transforms the hero’s understanding of everything; he learns his true identity and discovers a mystical destiny simultaneously. Cormac McCarthy may have excelled at the existentialist Western, but here Jodorowsky seems to have invented the Gnostic Western — all the while observing genre conventions and reveling in vulgarity and violence.
Is this “authentic” though? Will it make sense to an American readership? Well it’s worth remembering that, unlike most purveyors of the Euro-Western, Jodorowsky is himself American, albeit of the Chilean, Spanish-speaking variety, and he grew up in the 1930s and ’40s in a world as rough-hewn as any depicted in the movies. Thus, while it’s probably safe to ignore the works of Karl May and the fantasies of Germans in teepees who reject actual Native Americans as inauthentic, when Jodorowsky expands the Western into new territory, perhaps North Americans should sit up and take notice. The world of Bouncer may be strange and dark, but it’s the real thing.
Images courtesy of Humanoids.Originally published 15th Februarius AD 2012
Email ThisBlogThis!Share to TwitterShare to FacebookShare to Pinterest
Newer Post Older Post Home