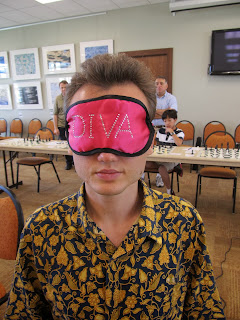 ‘I’d say I’m like an explorer,” the 25-year-old from Uzbekistan says. “It’s like a novelty for the chess world. I’m not trying to be that way, I just am that way.”

The US Chess Federation rated # 3 player is in Texas to practice for an upcoming world record attempt: within a year, he wants to play 50 games of chess simultaneously while blindfolded. The current record, held by Mark Lang of Germany, is 46 games.

Speaking in the Austin library where he will compete blindfold against multiple players a day later, the T-shirt wearing, languid Gareev explains his fascination with blindfold chess, while munching on the grapes that- along with sleep, yoga and meditation- he says help him maintain his “physical wellbeing” before an exhibition match.

“In blindfold chess, the concept is pretty simple: you don’t see any of the boards, and you’re playing many, many games at the same time. It’s showmanship, you know: If you create the environment where you can convey that in a theatrical experience, that gets to be pretty fascinating”

This is why Gareev studies the great American illusionists. He admires their ability to create spectacles:

“Especially David Copperfield: He created a whole new level of experience from these small tricks of juggling- suddenly he’s flying, he’s hiding the statue of liberty, making airplanes disappear- he created this whole new experience out of it.”

Gareev is currently searching for a sponsor for his world record attempt. Given his interest in showmanship, can we expect him to play blindfold in golden robes, on a spinning platform, surrounded by white tigers?

“It will be more like a planetarium experience,” says Gareev. “Where you can come in and feel the environment and just get fascinated.”

Currently based in San Diego, Gareev was born to Tatar parents in Tashkent in 1988. He was 4 when his grandfather taught him how to play chess. His great-uncle, a general in the Russian army, is a renowned theoretician of war.

During his childhood, Gareev spent “hours and hours and hours working with my coach” the Soviet Grandmaster Georgy Borisenko. The effort paid off: he won his first major international competition aged 12, and qualified as the youngest grandmaster in the world 3 years later:

“At that very moment I guess I was the youngest but not the youngest in history by any means,” says Gareev, who is coolly confident but not boastful. “Within a few years there were 13 and 12-year -old grandmasters. Now there is no great surprise when somebody becomes a grandmaster at 13 or 14.”

Aged 17, Gareev won a chess scholarship to the University of Texas at Brownsville: “It was always my dream to come to the United States. That certainly opened a world of opportunities for me.”
Gareev plays regularly on the American competitive chess circuit; recent victories include the 2011 Chicago Open and the 2012 North American Open. But blindfold chess is his “main thing at this point.”

Gareev estimates that he has played over 1000 blindfold games in the year and a half he has spent traveling the United States staging exhibition matches. Even so, he says: “I’m not at my optimal level by far.”
How does he do it? Vague when pressed for details, Gareev insists that “…memorization has nothing to do with it, it’s rather experiential, a visceral sense of pattern recognition.” The beginning stages are most difficult; after that the experience of playing so many games at once becomes “…like a form of meditation.”
Gareev starts the Texas event surrounded by 26 players of varying ages, who are positioned behind chessboards at tables arranged in a rectangle. Displaying some showmanship of his own, he is wearing a pink sleep mask with “DIVA” written across the front.

The players take turns calling out their moves; Gareev usually responds within a few seconds. More players are added throughout the day, until finally Gareev is facing 35 opponents simultaneously.

As the event unfolds, it seems that Gareev is correct: there is something fascinating about blindfold chess. Players and spectators alike sit in hushed concentration mixed with awe at the grandmaster’s mental feat.


Eventually, after 8 hours and 55 minutes, the exhibition draws to a close. Gareev has won 23 games, lost 2 and drawn 10. Does he feel closer to the world record? Gareev says only: “This was the most well-organized and most welcoming event I have played.”