Review: Whispers in the Walls and Pandemonium (Coliseum)

My interest in comics ebbs and flows. So much that is published is embarrassingly bad, but I still love the medium, and so I want there to be books that are good. English language comics publishing remains dominated by superheroes, an exhausted genre which was great when the stories were aimed at young lads, but which stinks now that the target audience is 30/40something anally retentive boy-men. Nor have I ever been able to develop a taste for autobiographical “indie” comics, which are often (though not always) a) boring b) poorly drawn and c) solipsistic. As a result, I search hopefully for European comics in translation, where the standard of craft is usually higher, there is a broader spread of genre and there are no images of Cyclops in a red thong.

Anyway, two recent European graphic novels that caught my eye are Whispers in the Walls by the Spanish creative team of Munoz, Tirso and Montes and Pandemonium, by the French-Italian team of Bec and Raffaele. Whispers was written by a professional screenwriter who has worked with Guillermo del Toro, so I was hopeful that he might understand the basics of plot and characterization in a way so many American comics writers do not, while I knew nothing about the creative team behind Pandemonium but the setting- a TB sanatorium in the 1930s- was unusual so I had high hopes. Both books are works of horror, featuring children in terrifying situations, and no images of Cyclops in a red thong.

Whispers in the Walls is about a group of children being kept in a mysterious infirmary in Czechoslovakia in 1949. Immediately, this caused me problems. I detest the lazy Hollywood habit of setting supernatural stories in an amorphous “Eastern Europe” filled with castles, mountains, yokels and hidden races of vampires. Yes, yes I know Dracula came from that general area but what the f***? I lived in Prague for a year in the late 90s and discovered a resolutely un-mysterious heritage theme park, populated by laid back materialists who like beer and hate conflict. Vampires? My ass. 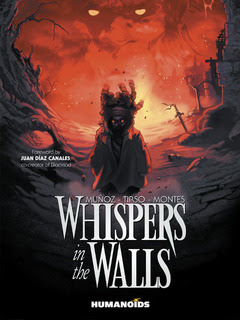 More problematic still is the book’s time-frame: 1949, when the Czechs and Slovaks were already living under a Stalinist government, complete with all the boredom, poverty and repression that entailed. Now a tale of the supernatural set in Klement Gottwald’s Prague might actually have been very interesting, but in Whispers history simply does not exist. Instead we’re in the generic “Eastern Europe” of Ghost Rider: Spirit of Vengeance, only without the self-mocking absurdity. In fact, the basic set up is very close to Guillermo del Toro’s Blade II, with a race of vampires hidden for millennia emerging from the shadows, dungeons, a secret plan to take over world, etc.

Many people like this kind of thing. And if you don’t object to Eastern Europe a la Eli Roth, then Whispers is a solid yarn, with good characterization, werewolves and vampires, dramatic battle scenes, and a consistently unfolding process of self-discovery as the children learn terrible truths about themselves and the world. It is not a bad example of its genre, and if you are not bored by vampires as I am, you’ll probably dig it.

Pandemonium I enjoyed a lot more, even though it is set in the Waverly Hills Sanatorium, a staple of shitty Travel Channel shows on haunted places, and where I believe VH1 even filmed an episode of the Celebrity Paranormal Project starring Gary Busey and a host of utter nonentities. It’s a testament to the atmospheric power of Bec’s writing that I didn’t make the connection until I was about halfway through. 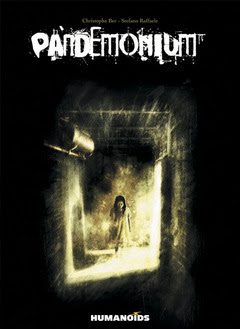 Although there are touches of the supernatural in the story, the horror at the core of Pandemonium is not fantastical nonsense about vampires, the kind of sanitized fantasy that nobody believes, but rather the all too real terror felt by those who are powerless in the face of institutional violence. The premise is simple: a woman brings her child to the sanatorium to cure her of TB, and soon both mother and daughter are trapped by a venal and corrupt administration with no interest in healing, that abuses its patients and conceals the cartloads of bodies being dragged off each night for incineration.

Bodies hang on meat hooks, skulls are surgically opened, women are drugged and raped, and at least some of this stuff really happened, though Bec keeps that aspect of his narrative ambiguous. The artwork throughout is excellent; Raffaelle is not bored by perspective or seduced by wacky page layouts, his faces are expressive and his landscapes are meticulously reproduced. Meanwhile the supernatural aspect of the story adds both an atmosphere of the uncanny and a subtext of social commentary, as it is the ghosts of disgraced women and segregated blacks that appear to the young residents of the sanatorium. This is precisely the kind of acutely observed historical detail that is missing from Whispers in the Walls, but which adds so much weight and plausibility to a narrative. In this Bec is carrying on in a fine French tradition of well-researched comics set in America. Moebius’ Blueberry series is the most famous instance, but also worth mention is Miss: Better Living Through Crime, a French noir set in prohibition era New York which, were it not for Torpedo by the Spaniards Abuli and Bernet would be the best noir comic ever created.

And yet, for all that the setting is American, at its core Pandemonium remains an intensely French book as the bleak and chilling climax, utterly bereft of sentimentality makes clear. American genre fiction just doesn’t do that kind of thing to children, and I don’t even think that’s a criticism. Although it’s not quite as harrowing as an image of Cyclops in a red banana hammock, Pandemonium is a good, dark tale of psychological horror, deserving of a much wider audience.
Email ThisBlogThis!Share to TwitterShare to FacebookShare to Pinterest
Newer Post Older Post Home