Review: Drawings from the Gulag by Danzig Baldaev (The Dabbler)

Drawings from the Gulag begins unexpectedly, with a headshot of a proud homo-sovieticus from one of the USSR’s eastern minorities. Wearing thick soviet spectacles and a soviet suit, and with impeccable posture, this man gazes at you, the reader, with firm resolve. Here is a stalwart Comrade-of-the-Month, whose portrait would be placed at the entrance to a massive factory complex in some industrial soviet city. Forget bonuses and a salary raise — true glory was to be found in constructing the socialist future.

The man is Danzig Baldaev, and to his colleagues he really did appear to be a loyal soviet citizen. Born in 1925, he worked for decades in the soviet prison service- no place for the squeamish, that’s for certain. And yet flip to the first illustration in the book, a drawing of a crowd of proud revolutionaries titled ‘Inception of the Gulag’ and in the top right hand corner there is an inscription that reads: ‘Dedicated to the 70th anniversary of the giant of Russian literature, A.I. Solzhenitsyn.  11th November 1988’. A strange thing for a career penal officer to write, no?


Flick forward another few pages and you will find yourself staring- most likely in horror — at the most violent and visceral denunciations of the USSR you are ever likely to encounter. For behind Baldaev’s proud, firm gaze lay a moral fury that expressed itself in surreptitiously drawn, painstakingly detailed depictions of the rape, torture, cruelty and degradation that occurred in the Gulag on a daily basis. 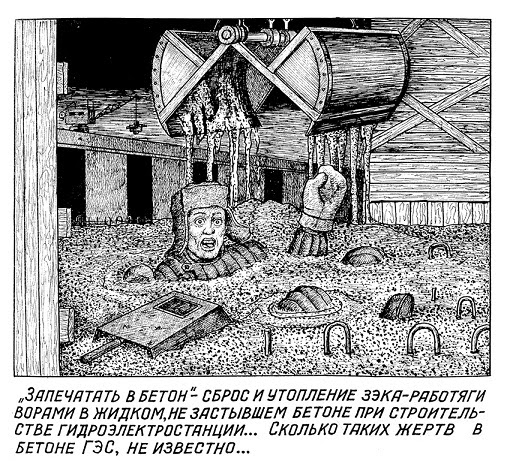 Let’s try the random flip method. I pick up the book, close my eyes, flick through the pages and-

P132: Three prisoners are forcibly drowning an “enemy of people” in an enormous barrel of sewage.

P133: A startled Zek is now drowning in concrete — Baldaev remarks that this was a fate commonly inflicted by “criminal” prisoners upon workers- i.e. those who had been tossed in the Gulag as slave labour. ‘There is no way of knowing how many victims the concrete structures of power plants hold’ he notes.

P159 A woman, naked from the waist down is tied to a tree and positioned atop an ant hill, a funnel feeding ants into her vagina.

P102 A deep pit, filled with enemies of the people forced to live in a hole in the ground in -40 because no barracks have been built for them. Baldaev notes that around 75% of these prisoners would die.

You get the idea: Baldaev’s sketch book contains many pages of relentlessly brutal depictions of the extremes of human cruelty.

Initially — because Baldaev is fond of cross hatching and draws a lot of rape – his book reminded me of the work of Robert Crumb. But whereas Crumb’s work is primarily an expression of solipsism and neurosis, Baldaev draws things that actually happened. Perhaps then it’s more like Goya’s series on the horrors of war. But Goya’s work is more aestheticised. The last time I saw those pictures at an exhibition I rather enjoyed myself. Baldaev makes you flinch time and again. He stuffs the horror down your throat, smears filth across your eyes.  His horror is sincerely, willfully gratuitous, although there is nothing wrong with being gratuitous when reality itself is gratuitous — a point well made by the book’s editors who annotate many of Baldaev’s most extreme images with references to other works on the Gulag (most frequently Varlam Shalamov’s Kolyma Tales). 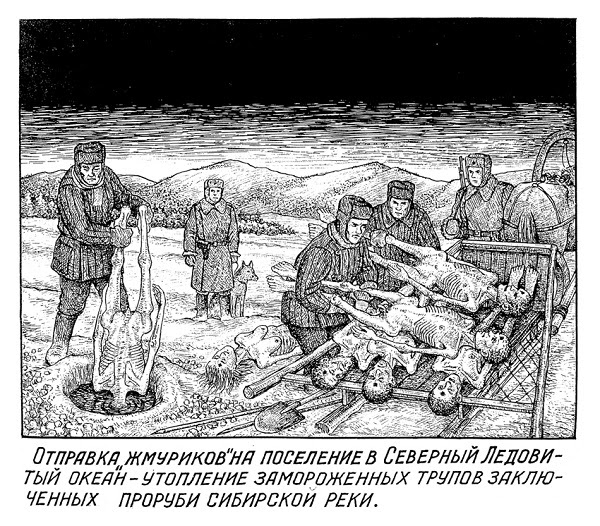 But back to the proud homo sovieticus at the front of the book.  A few years ago FUEL, Baldaev’s publisher, produced a handsome three volume set of his Russian Criminal Tattoo Encyclopaedia. These books were also chock-full of images of sadism and rape (with bonus skeletons and demons) — all of which Baldaev had meticulously copied from the skin of the prisoners in his charge. A key difference between those books and this one however is that the encyclopaedia was produced with the blessing of the soviet authorities, who valued the insight it provided into the criminal subculture within the camps. Drawings from the Gulag however was a secret work which Baldaev worked on in the days when the full horror of Stalin’s system had not yet been admitted to. It was a private defiance of forgetting from a man who had himself seen the cruelties of the system from both sides — for long before he became a prison guard his father had fallen victim to Stalin’s purges. Baldaev subsequently spent part of his childhood in an orphanage for ‘enemies of the people.’

Perhaps this explains his almost equal emphasis on the horrors inflicted not only by the guards on prisoners, but on the things prisoners did to each other.  Baldaev understood the line between victim and oppressor was not so clearly drawn. A weirdly prissy review in the Observer danced around the issue of whether Baldaev’s work was pornography, but the truth is that this book shrieks not of fantasy and prurience but a crushing flatness — it is a meticulous, bleak record of darkness, and as such raises questions that are difficult to answer.  Has a more perfect system for generating evil ever been created? Is there any vileness the human species is not capable of, given the right (or wrong) set of circumstances?

Perhaps the most disturbing thing about Drawings from the Gulag is its almost total absence of redemption. When you read The Gulag Archipelago it is hard to forget that the book’s mere existence is a testament to the heroism of Solzhenitsyn and the people who helped him compile it and smuggle it to the West — and as such that trilogy represents a small triumph over evil. Drawings from the Gulag on the other hand is a secret account, created in darkness as a testament to darkness — a ruthlessly repetitive sequence of revelations as to what a bunch of cowards, carnivores and shits people can be. Yes, and not only that but it is a work that forces us to confront a simple, dismal truth which we — lucky and comfortable — may prefer not to dwell upon: that for millions of people who had done nothing wrong, people just like you and me, there was nothing they could do to be free. There was no way out from the Hell they were trapped inside; they were without hope, and thoroughly doomed.