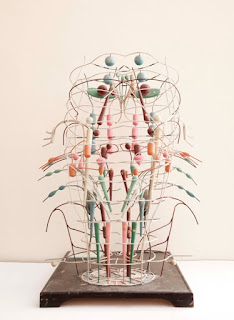 Certainly it is a curious soul, comprised as it is of colorful balls and plastic carrots; and since dialectical materialism does not allow for the existence of souls, even this apparently meaningless assemblage of bits and bobs represented a potentially grave ideological threat to the Soviet regime. Stalin concealed the fact of its existence, and as a result Lenin's soul spent much of the 20th century in a janitorial cupboard in the basement of the Moscow Brain Institute.

In the early 1990s, the soul was rediscovered  by a post-Soviet businessman who had made a fortune in the coffin business. After assembling it in the structure pictured, he dispatched it on a tour of Russia, where it was accompanied by a stuffed bear, a six-legged calf disinterred from the storerooms of Saint Petersburg's Kunstkamera, and a waxwork Victor Tsoi.

When Vladimir Putin began restoring Soviet symbols in the mid 2000s, the soul's tour of Russia ended. Today it is back in its cupboard in the Moscow Brain Institute.

Those of us old enough to remember the Cold War are privileged to have known, in acute form, the terror of the real and imminent threat of nuclear Armageddon. It was a peculiar psychological state, and one for which I feel a curious and inexplicable nostalgia: that awareness that at any time the entire human race could be wiped out at the flick of a switch.

For children, of course, the terror was even more profound, as it was so much harder for us to understand why we all might suddenly die by fire. I lived near a naval base in Scotland and the regular tests of the 8-minute warning siren, an eerie wailing audible as I played in my garden, instilled in me a cold panic: Am I really going to burn?

By contrast, today's most prevalent doomsday scenario- climate change- unfolds slowly, and offers us an escape route so long as we switch to renewable sources of energy and eat more organic carrots. In its sense of imminence, nuclear Armageddon was closer to the terror of the Last Days as felt by the early Christians, but far more capricious, and infinitely more hopeless. A sublime ultra-violence from the sky would kill us all, and whatever unlucky remnant did survive would succumb to slow death by radiation poisoning.

And what exactly was it we were fighting over? Coke vs. Pepsi? Whose skyscrapers were the tallest? Something about noble proletarians and top hat-wearing villains? That, I think. Like Manichaeism, which once reached from the streets of Rome to the endless steppes of Asia it's all gone, although moth-eaten copies of the sacred texts can still be found. Pick one up, however, and the threat we lived under makes even less sense. I mean, have you read The State and Revolution?

I was in the Central Armed Forces Museum in Moscow when I saw it: perfectly preserved, intact behind glass- the glove.

At first I wasn't quite sure what I was looking at, or what it was made of. In many ways it didn't look like a glove at all. Yes, it had four fingers and a thumb, but why was it so small and yellow and twisted and crispy? It was like some thin membrane that had been washed and left out in the sun too long. Try to put it on and it would disintegrate into flakes.

Then I read the text: ah yes, I had heard about this. It was a glove made of human skin, according to technique practiced during the Russian Civil War. You'd take your enemy's hand and plunge it into boiling water, then lift it out and peel the softened skin away, exposing the fresh, steaming meat beneath.

According to the museum text- still Soviet in style and outlook -only the White Armies tortured their foes this way. However, according to the book in which I had first read of this exquisite cruelty, it was a torture method beloved of the Cheka.

Regardless, I wondered about the victim. What had he done (I assumed it was a man) to merit this treatment? What had happened to the rest of him? And if he had somehow survived then what did his hand look like a week, a month, a year later?

Ineffable mysteries. Now, almost a century later, with the war over, the regime vanished and the Cheka rebranded multiple times, the details of the why and the who and the what next were lost forever. All that remained was the glove: one more hopeless, unholy relic of the era.

What's your favorite apocalyptic Russian sect? Mine is the Skopt castration cult. I am endlessly astonished that its members managed to turn a little creative wordplay into a crusade of apocalyptic self-harm that outlasted the Tsars.

I accept that iskupitel (redeemer) is a vowel switch away from oskupitel (castrator). But it still feels like a leap to a reading of the gospels in which Christ lops off the cocks of his disciples after the Last Supper. Likewise I doubt that Revelation 14 really is a mandate to castrate 144,000 men and women in order to hasten the end of this world and the advent of a new one.

Yet the Skopts did believe, and persuaded tens of thousands of Russians to surrender their genitalia to the "fiery baptism." Naturally they were saving souls:  ‘Strike the serpent, strike it quick, strike it dead- before it springs at your neck and bites.’ Castrate twelve men and you were guaranteed passage to heaven.

In the early 20th century the Skopts had around 100,000 adherents. In 1910 the Russian Social Democratic Labor Party had just as many members. The Bolsheviks were a minority sect within the Social Democrats; thus the idea of destroying your genitals to attain paradise was more persuasive to more people than Lenin's take on Marxism.

Although the Bolsheviks suppressed this rival group of millenarians following the Revolution, the last Skopt lived into the 1970s, the era of Brezhnev and Boney M. And while I cannot lament the disappearance of an erroneous belief that inspired its followers to mutilate themselves so horribly, I nevertheless feel that the fact of the Skopts having existed is somehow key to profound mysteries of the human soul. If I can truly understand the Skopts, then I might understand everything; or everything that matters, at least.

Vladimir Putin first exposed his torso to the world in 2007. There he was, hunting in Tuva with just a rifle, an orthodox cross and his nipples for protection.

Until that point, Putin had promoted a businesslike image. Not since Lenin had a Russian leader looked so at ease in a suit. Putin's suit-wearing denoted a serious, businesslike attitude: perhaps a certain Western- leaning propensity. In stark contrast to his predecessor, this was a man who would never play the spoons on the shiny head of the president of Kyrgyzstan.

The revelation of Putin's preternaturally smooth torso was thus a major paradigm shift. Yet when it appeared- whether atop a horse or in close proximity to a fishing rod- Western observers sniggered. After all, the shirtless authoritarian is different from the half-naked leader of a democracy relaxing on beach. Whereas the latter is stressing he is "just like you", the former seeks to embody the youthful vigor of his regime. Putin's torso was thus  a flashback to 20th century dictator kitsch, to images of bare-chested Mussolini sledding in the snow, of hairy Ataturk preparing to wrestle, of tubby Chairman Mao bobbing along the River Yangtze.

Recall, however, that this was never a Soviet nor Russian tradition. Stalin had chosen instead to embody the Soviet Union in the pickled husk of a dead intellectual, his predecessor: timeless, unchanging, suit-wearing. But while Putin may have worn a suit as well as Lenin, his philosophical magnum opus was not a work on Materialism and Empirio-Criticism but rather a handbook on judo.

Thus it emerges that the Fall of the Berlin Wall represented not the end of history but rather the prelude to something only now emerging, that we can as of yet see through a glass, darkly: the era of Putin's torso.